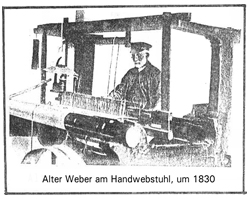 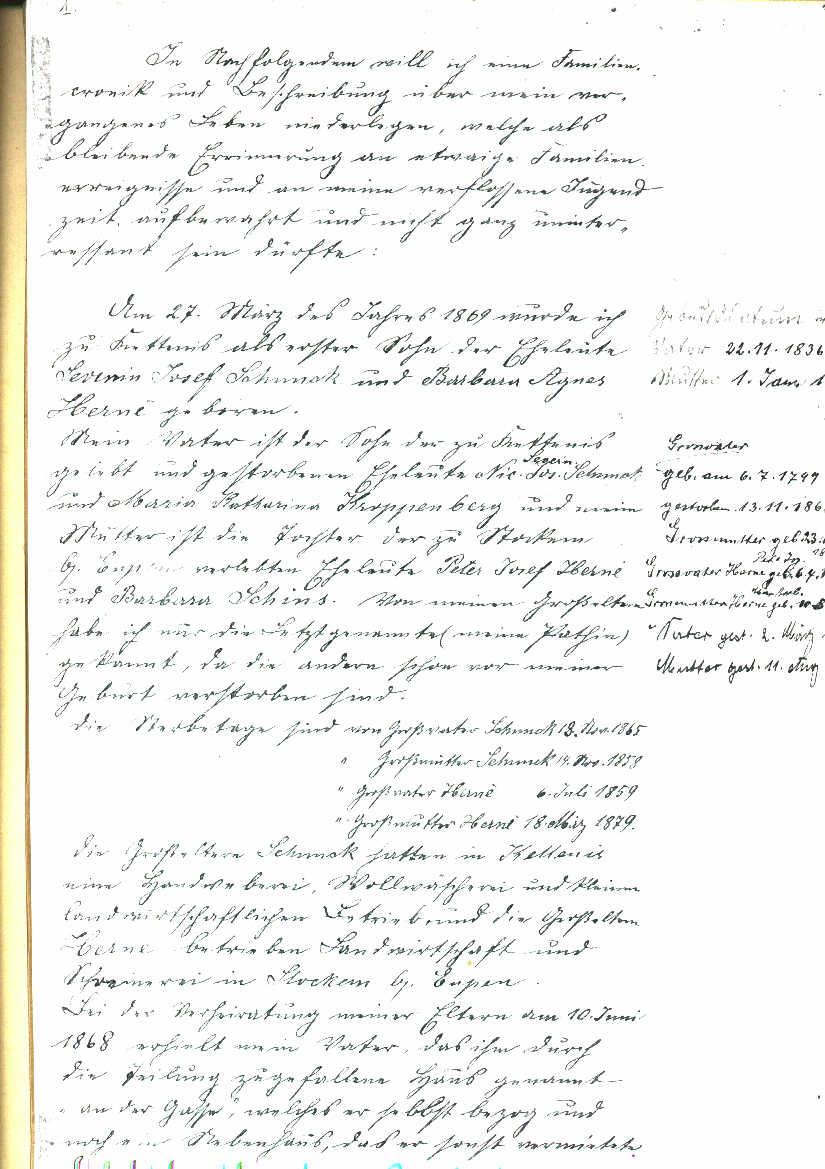 ⇒ This page of the manuscript in full size

In the following I want to register a family chronicle and a description of my life, which might be interesting and should be preserved as a lasting memory of any family events and of my bygone youth time:

Grandparents Schunck had a hand weaving mill, a wool laundry and a small farm and grandparents Herné in Kettenis had a farm and carpenter’s workshop in Stockem.

House called “On the Alleyway”, Kettenis

On the Talstrasse (An der Gasse = On the Alleyway) in Kettenis. When this picture was taken, in the left part (N°17) was the shop of Albert Kroppenberg, a relative of Maria Katharina Kroppenberg (but how?). Later here was the barber shop Buchem. Right (N°15) the house Schunck, built for more than one family. Behind it was the weaving mill.
Dorfzeitung Kettenis

When my parents married, on 10 June 1868, my father obtained the house called "on the lane" by partition of the inheritance. They settled there and rented a neighboring house, which was assigned to him too. In the same way he also took over the hand weaving mill, operated in the same house, to ensure their earnings.
He took over work for other weavers and operated even with several journeymen.

When I was hardly one year old I was heavily injured at my right hand. I hardly could do my first steps when in an unguarded instant I fell on the hot stove, so that the skin of my hand stuck to the furnace. The injury did not want to heal at all and my parents had many troubles with it, until in the end it healed with steinoel (= petroleum). As a souvenir of this incident I have got a large scar at the right hand, which also is a bit smaller than the left one.
On 28 January 1871 I got a little brother, who was baptized with the name Heinrich. In the first years my parents went through much illness with him, since Heinrich was a very weak child.

The first sister joined us on March 26th, 1873. and is called Maria, then on March 20th 1875 still another sister came with the name Josefine. Now it was already my job to carry the little sisters around and to replace a nanny a little bit. Heinrich and I also went walking sometimes together at the hand with others in the lane and meadow. During this time I spent much time with my grandmother in Stockem, whom I liked very much, since she always had a great deal sweets for children. Uncle Heinrich in Stockem teased me that they would have cows and we not, on which I said that on the other hand we had a Jansens goat and a Doume meadow. That was my childlike innocence, that I believed everything which belonged to our neighbours would be ours.

In the year 1874 on a summer day my brother Heinrich and I and some other children went into a neighbouring meadow to pick flowers. In this meadow, now “Weling meadow”, there was a muddy pool. Its banks were surrounded by wild rose bushes, full of roses. Our Heinrich, a special friend of roses, wanted to pick a rose there, lost his balance and fell head first into the water. An older boy from our neighbourhood saved my brother from the sure death of drowning. This boy was the son Josef of the verger Ganser. The latter lived with us to the rent at that time. I was a bit off the mud hole in the meadow and just saw how Heinrich, totally covered with mud and half-dead, was brought to our mother. Soon Heinrich came back to consciousness again and kept an strong cold from it.
In the year of 1877 on March 31st, the stork brought us a little brother again: Josef.

About this time the hand weaving trade began to slow down. Everywhere mechanical looms were set up and so the profession of hand weaving was more and more superseded. My parents, who depended totally of it with their existence, were not bedded on roses indeed. Many times a week my father traveled to Aachen, however without getting work. Those were sad times.
In the year of 1878 my parents built the house near the church. That’s to say: uncle Herné built it instead of giving cash from grandmother’s inheritance.

On 11 March of the year 1879 we got the third sister with name Luise and on 1 January 1882 the 7th child with name Hubert Leo.
As of the spring of the year 1875 I visited the elementary school in Kettenis and Mr. Gerhards was my first teacher. Then Mr. Göttingen followed, Mr. Brüll and finally Mr. Longhaye as teachers. Chaplain Schmitz gave the religious instruction. The latter engaged me already in the earliest youth as a server. I practised this position still beyond the school years in the local church and once each week on the “Upper Heath”. Me and my brother Heinrich also were active as tenors in the mixed choir which existed at that time under the direction of Mr. Longhaye. At that time attendance of school was differently ordered than today. One could receive a certificate from the local school inspector and pastor, Mr. Wieland, that the parents had a very urgent need for the son’s or the daughter’s help. Then one gave this certificate to the teacher and stayed away from school according to that permission. Of course I stayed away from school several days a week because my parents had a lot of work for me to do.

On Buß- und Bettag (Penance and Praying Day) of the year 1882 I went to the First Holy Communion in our church in Kettenis. This was a very solemn ceremony, which I like to remember in my whole life. As a partner for the Communion I selected Johann Kohl from Libermé, who then was my friend for a while. On the Communion Days we went alternating to each other and amused ourselves with shooting birds, doing gymnastics etc.. Then also Augst Wertz and Christian Rosskanp, Josef Cormann and our Heinrich joined us. Oftimes we went to Wertz in Merols, who had a heavy horse in the meadow, to learn the equitation over there.
There once a accident almost occurred to us. The heavy horse ran down our Heinrich and kicked him into his back, so that the horseshoe was drawn on his cardigan. He however didn’t even suffer a contusion of it, but he stood up and did not know what happened. Thus for the second time he was saved from a mishap.
Since I’m speaking of Heinrich anyhow, I still want to mention how, like by a miracle, he did not become a involuntary murderer. As a boy of about 14 years old, Heinrich visited Nic. Jos. Hausmann, who was our tenant, in his apartment. Curious as he was he drew up a drawer of a cabinet and saw a gun in it. He asked Hausmann whether he would allow him to have a look at the gun.
“Yes,” he said, “just take it, it’s not loaded.” But scarcely had he had it in his hands when the shot went off and the bullit went through Hausmann’s beard. I don’t need to mention that both were chalk-white. For many years both of them concealed this occurrence.
One Sunday also a nice thing happened to us. We were 4 lads of 12 to 14 years old. We made a trip with Wertz’ horse to Reinartzhof near Roetgen, where some relatives of Wertz lived. The 2 hours way was a forest road and we alternating rode the horse, while the others walked. Once, when it was my turn again (but I hadn’t yet mounted) Caspar Wertz ran with the empty horse a little distance. There the heavy horse suddenly sunk up to its belly into a sump. Now we were in a fix, because the animal’s legs were completely fixed in the mud. After long work and with the help of wood storing there the animal suddeny came out with a single jump. Now we had to carry the saddle until we would have cleaned the horse, that was covered with dirt, with fern in the Weser creek. Then we could continue our original sport.


This is all, I translated until now. If you can read German, click on next

Taken during the pow how of the Belgian Schuncks in Kettenis on august 21, 2011.