Farewell to the member of the Dutch Resistance Movement “Paul” (Pierre J.A. Schunck,)

Bearer of the Resistance Cross

Funeral oration, held by a comrade in arms “Harry van Benthum ” (Theo Goossen), Heerlen
during the celebration of the Eucharist at 11 a.m. in the Church of the Holy Family in Schaesberg (Landgraaf, NL), February 6th, 1993.

funeral oration, held by a comrade in arms “Harry” (Theo Goossen), at the farewell celebration of “Paul”, p. 1

On one of the first days of september 1943, the L.O.- district of Heerlen (Netherlands), was founded. One of the persons present was a man with the resistance name "Paul Simons". This happened in in the flat of rector Prompens in the St.-Jozef hospital.
L.O. meant: "Landelijke Organisatie" (National Organisation for help to hidden people like Jews, allied pilots etc.. The L.O. district, in the beginning known as L18, later as Z18, covered, in addition to Maastricht and environs, about ¾ of the southern part of the province of Limburg (Netherlands).

Curate Giel Berix from Heerlen, a friend of „Paul“’s and fellow-founder of the L.O. in Heerlen, became after the retirement of Rector Prompers by some good reasons and according to his own wishes, the leader of the district Z18 (He was arrested 21.6.1944 in Weert and died in the concentration camp of Bergen-Belsen). The district of Heerlen was divided into 9 rayons.
The present Mr. „Paul“ became the leader of the subdistrict Valkenburg. The activities of this group stretched away to and reached Gulpen and Maastricht. Also Klimmen and environs were incorporated with the subdistrict Valkenburg.

During several secret meetings and the necessary cooperation they got better acquainted with each others and some learned a little about each others familiar situations and even surnames.
„Paul“’s family name was Schunck, he lived in Valkenburg, where he had a laundry. There his wife Gerda was playing an important part too. At set times you could find „Paul“ in Heerlen in a clothing factory at the corner Kruisstraat-Geleenstraat.

„Paul“ Schunck’s resistance was directed against

His acting mainly was aimed at assistance to people in trouble:

Funeral oration, held by a comrade in arms “Harry” (Theo Goossen), at the farewell celebration of “Paul”, p. 2

„Paul“’s own business interests again and again were interrupted by the distress of other people. This situation requires too: looking out, being carefull and acting inconspicuously. ALWAYS in the hope, to be able to evade the danger (though hidden, but always present). In this atmosphere we have to look at „Paul“’s more than 2 years lasting organised resistance activities.
In addition we have to take into consideration: several times he was in real peril of his life.

In his own words: „I don’t understand. I cannot explain it. I was very lucky! But I prayed a lot!“. And he adds: „I didn’t do all this alone. And without the support by my wife lots of things would have gone totally wrong.“

„Paul“ also is a member of the intelligence group ID18.

In the night of 1944-9-16 the Germans leave Valkenburg.(See also Liberation)„Paul“ contacts the liberators, as ordered by the Resistance. He will help them in any possible way. 1944-9-20 Bep van Kooten visits his comrade in arms „Paul“ and tells him, that the Resistance people come together in the "Koninklijke Stoottroepen" (Royal Stormtroopers) of the regular army and begs „Paul“, to support this action. „Paul“ proudly canvasses for it among the members of the L.O. 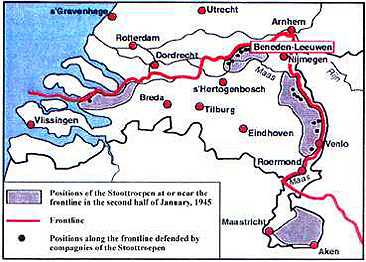 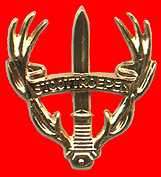 And so it happens:
Applications for registration are received, lists are drafted, checks executed, necessary information given, suitable accommodation and workshops are searched, a garage for transport and servicing is recommanded! Results of these actions are, among other buildings, the houses Philips and Oranjehof. The relations with the liberators were OK and exist untill today! (A friendship for life joined him with Bob Hillecue from Chicago, member of the „Old Hickory“ division, that liberated Valkenburg.)

Mrs Schunck, children and your families! The Resistance people and Stoottroepers gathered here wish, also in the name of those who cannot be present, to express their thankfulness towards „Paul“ Pierre Schunck:

Mrs Schunck, children and grandchildren, it hurts to say goodbye.
... the VERY MANY good memories will strengthen you!!
Resistance comrades and Stormtroopers, we say goodbye to a good comrade.
„Paul“ : may you rest in well-deserved peace !