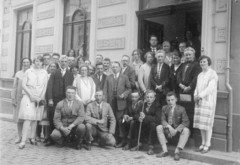 Catharina and Jean Cremers-Eck had come to Valkenburg between the birth of their daughter Gerda ∗ 10 september 1912 in Heerlen) and son Joop (∗ 7 juni 1915 in Valkenburg, so during the First World War). Jean became there teacher at the MULO for boys, and he also aided Belgian refugees. A million Belgians came to the Netherlands during the First World War, and many of them were in Valkenburg. A pandemic of Spanish flu broke out at the end of the war as a result of the many weakened people on the move throughout Europe. 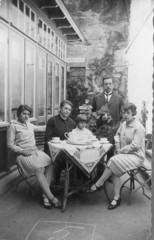 On the Muntstraat Valkenburg Catharina Cremers-Eck started a guest house, in collaboration with some neighbours, where the guests spent the night. In their house, number 7, was the dining room, the reception and the private residence of the Cremers family. That was the origin of Hotel Cremers.
Christine Schunck writes about this picture:
“Gerda and Joop had a darkroom behind the terrace of the guest house in the limestone cave below the ruin of the castle (The entrance can be seen in this photo from 1927/28).”

It was no wonder that Jean Cremers also fell victim to the Spanish flu. It is no longer possible to find out, whether the royal decoration was related to his illness.

Before we will learn more about the short but powerful history of Hotel Cremers, we will get a more personel insight by the memories of Jetty van Zutphen-Cremers, who grew up in the hotel. She wrote them down many years later, partly seen with the eyes of the little girl she was still at that time, partly with those of the art historian she would become later.

“Many more years of good health with Pierre”
I already wished you. The party is over now.
Now I would like to pay some attention to the relationship that existed, and still is existing, between us both.
When I was born in Valkenburg, Muntstraat 7 on June 4, 1923, you were more than 10 years old. It was high season. You had probably the job taking care of me. And later you continued to do so.
When I was a little girl, I found it great to have such a big sister who could play the accordion, piano and violin so well. It was even more a feast, when Piet Bos came with his saxophone. I think I still know exactly where the piano was standing. In the porch. Seen from outside, in the left corner. Is that right?
You, as my older sister, did not only care for me. You had to help in the hotel early. You made a contribution that in ’29-’30 a new hotel could be built. Wielders from Sittard was the architect. He applied principles of the Stijl movement. Do you remember the chairs and tables in the hall? The color contrasts and color areas in the conversation room? Now the hotel is completely derotated. It looks horrible.
The thirties. When times are bad, this affects soon also on the hotel industry sector. You, and Wielke at the office, you helped to keep things going. (Jopie could study, and I was too little.)

The pivot, the driving force behind everything was Mum.
She rose up first and went to bed last. She could cook like the best. No cook ever surpassed her. But above all she was a good mother. Do you know that I still call “Mum!” when something bad happens to me?
Dear Gerda, many guys found that you were lovely. There were a lot of candidates - ten for each finger - who wanted to hijack you. Pascal Randou almost succeeded.
Pierre Schunck has succeeded completely. He ran away with you. Yes, so we experienced it when you left. I found it really bad. However, you remained still living in Valkenburg. And you still had time for us.
Pierre Schunck is still your daily companion. For 56 years. Pierre and you, you had a fertile life. Not only in terms of quality and number of children. Your life has also borne fruit for other people.
You also have stood by me in word and deed.
Gerda, you meant a lot to me!
May I thank you for everything?
Your sister
Jetty

Images of the Cremers-Eck family

Hotel Cremers was built at the end of the twenties of the twentieth century in the style of the Amsterdam School and it was opened Pentecost 1930.
According to Jetty Cremers, who grew up there and studied art history, the building has the style of De Stijl. I just mention this without any further comment.
According to the standards at the time it was very comfortable.

Architect was Jos Wielders,
∗ 09/03/1883, † 04/30/1949.
Many of his works are described as expressionist. He also designed the famous water tower near Schimmert.
His clients were Jean Cremers (1878-1947) and Catharina Cremers-Eck (1882-1950). Catharina financed it mainly with the proceeds from her guest house on Muntstraat 7, see above. She also had the daily management in the hotel as Jean Cremers was already disabled at that time by the consequences of the Spanish flu. However, he had to sign every financial document because until 1957 married women were limited in their contractual capability.

During and after the Second World War

Meanwhile, Catharina knew she would stay without a successor in the hotel. She had hoped that her daughter Gerda would take over the management one day. According to her own statement, she would have liked to do so. She had helped building up the hotel and thereby learned everything a hotelier must know and be able to. But she had married on October 3rd, 1936. Her husband, Pierre Schunck, should have been involved. But he had no real ambitions in this direction, because he was simply not the kind of man for it.
During the occupation the Germans seized a number of hotels in Valkenburg for their staff in the region. This was also the case with Hotel Cremers.
The couple Cremers-Eck knew now that their time in the hotel was over. They moved to the Grote Straat (today Grotestraat Centrum) and lived above a shop, opposite the then town hall, today regional museum. Because German soldiers used to go in and out there, grandma did not allow her grandchildren to stand by the window with a glass of orange lemonade in their hands. It was a nice, big apartment. They lived there still after the war, until the house on Plenkertstraat 92a (old house number) was finished.
This house was built on the property of the laundry P.Schunck, Plenkertstraat 92. The architect was the same Frits Peutz, who had also designed the Glass Palace in Heerlen before. It had to become the residence of the couple Cremers-Eck and their unmarried daughters. Peter Schunck, who ordered its construction, was the father-in-law of Gerda Cremers, so the father of Pierre Schunck, who was the director of the laundry.

We don’t (yet) know which contractual construction is at the root of this. According to the ownership certificate below, on April 20, 1953 Mrs. F.J.H.M.Dohmen-Schunck from Heerlen was the owner. Who is that? Peter’s daughter Maria Leonie Christina Schunck, nickname Christine, had completely different initials, but no other Mrs. Dohmen-Schunck is known in the family of Peter Schunck. Yet it must have had to do with that family, which is also testified by the fact that the stones were delivered by the quarry Kunrader Steengroeve en Kalkbranderij P.Schunck.
A hypothesis: when the Germans disappeared from Valkenburg in September 1944, the hotel was also free again. Because Catharina was now too old to continue the exploitation of the hotel, this was the ideal opportunity to sell it. Buyer was the husband’s family of her daughter Gerda, in the person of Peter Schunck and his daughter Christine. Was the counter-service perhaps a life annuity with free housing? As mentioned, this is so far a hypothesis, which in addition does not explain the question of the initials. Further research will hopefully herein bring more clarity. By the new owners the hotel was leased to the Cobbenhagen family, who operated it from 1945 to 1954, see below.

Jean Cremers died on May 2, 1947, before the move to Plenkertstraat 92a, at the age of 68, after a long and increasing disability as a result of the Spanish flu. Catharina Cremers-Eck and her daughter Wielke Cremers lived on the Plenkert from 1947 to 1949. Jetty had already moved out in August 1948 on the occasion of her marriage.
Catharina and Wielke moved to Bogaardlaan 7 in Valkenburg at the end of 1949, when Pierre and Gerda Schunck-Cremers came back from Bonaire and had to live somewhere. Both mother and daughter died in 1950.

In an article in the last edition of 2016 of the quarterly magazine KIJK op Valkenburg, published in Valkenburg, about Hotel Vue des Montagnes – now Hotel Vue – in Houthem, we can read that the Cobbenhagen family operated this hotel from 1945 to 1954.
After the notarial deed of April 20, 1953, the hotel had already been sold at that time by Christine Schunck, a sister-in-law of Gerda Schunck-Cremers. We do not know when and how it passed into her possession. The Cobbenhagen family apparently operated the hotel as tenants. Then it was bought by the family Austen. They continued to operate it until the early nineties of the last century. Afterwards the hotel gets the name Parkzicht.

In 2014, the already abandoned hotel is closed by the mayor because of a weed plantation found in the cellar. After the end of the forced closure (6 months) a new owner started the reconstruction and renovation of the building. It will be one of the jewels of Valkenburg again!

The content of the above text is primarily the compilation of a correspondence between a son-in-law and some children of Gerda and Pierre Schunck-Cremers, completed with own research. This is shown below, sorted according to the questions of the above-mentioned son-in-law and the answers to it. It is only interesting for those who want to read the exact formulations, because the essential is already written above.
These are no sensitive data, it is just about people who are no longer alive. So no one still lives at the indicated addresses. Therefore, this page is generally accessible. The participating siblings received a number instead of their names, since they are still alive.
It starts with an e-mail from September 8, 2012, with some questions about Hotel Cremers and its owners, the couple Catharina Eck, 1882–1950 and Jean Cremers, 1878–1947, to their descendants. On that there has been some feedback in the course of the years.